Innovation: From Buzzword to Backbone

Whether describing products and services, defining a brand, or inspiring a team, “innovation” is a buzzword that works. But how do entrepreneurs get beyond the buzz? How do they ensure the word “innovation” truly represents the backbone of their business? 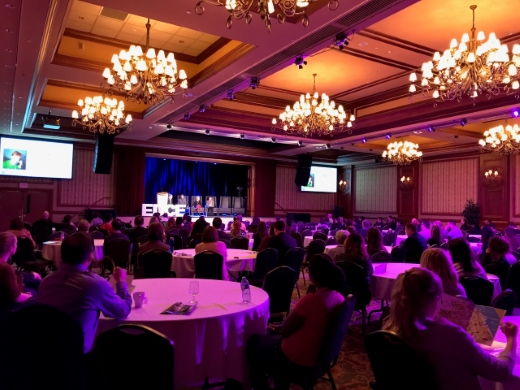 At a recent Entrepreneurial Development Conference and Expo (EDCE) in Halifax, Nyla Ahmad, Senior Vice President of Enterprise Marketing for Rogers Communications, shared her insights on the topic. Described as a “powerhouse of innovation” by EDCE CEO Liam Byrne, Ahmad delivered an engaging keynote with a potent message: Innovative thinking can become habitual.

Despite being an award-winning innovator in her own right, Ahmad drew on the legacies of others to describe seven habits of highly innovative people. To illustrate the first, Ahmad, a self-described “space geek,” showed a photograph of the Space Shuttle Endeavour’s final launch.

Taken from an airplane window, Ahmad said the photograph demonstrates the power of perspective. “The people on the plane saw the same thing as those on the ground but the perspective was different,” she explained.

“That’s what innovative thinkers do. They see things differently.”

But every vision requires action. “I learned this from Ted Rogers,” explained Ahmad. “Highly innovative people don’t sit around and tell you their ideas—they show you.” And they keep it simple. Referencing Steve Jobs, Ahmad emphasized that, “simplicity is an asset. It prevents us from getting so distracted by the details that you lose the plot.”

Innovators never stop asking questions. Invoking the memory of renowned mathematician, theoretical physicist and Albert Einstein mentor, Emmy Noether, Ahmad talked about learning as a quest rather than a destination. “Innovative thinkers are not energized by what they know, but by what they learn from those who know things they don’t.”

Citing the example of Jane Goodall and the peer backlash she faced early in her career, Ahmad next reminded the crowd that innovators respect instinct. “You take feedback, observe what others say, but continue on your own path if you think that’s the right one.”

She also stressed that you need to look beyond your own industry to discover how your business can benefit. Ahmad heralded the success of The Cirque due Soleil as an example of multidisciplinary thinking. “We can’t be afraid to look at other industries and bring that model to ours. The Cirque’s fundamentals are drawn from the opera and Shakespearean theater and applied to the circus. It’s become a cultural event.”

Taking risks is also necessary. “We don’t need more to aim higher,” Ahmad said as she showed a picture of the Apollo 13 ground crew. “They had rotary phones and pocket protectors. We have everything we need at our disposal to create businesses that are more interesting and more innovative. We have what we need to aim higher.”

Ahmad ended her presentation by reinforcing her main point.

“Innovative thinking can be developed. It can become habitual.”

The EDCE event was marketed as one that would feature expert speakers who have “been there, done that.” By bringing in Nyla Ahmad to talk about innovation, Byrne and his supporters proved their buzz had backbone.