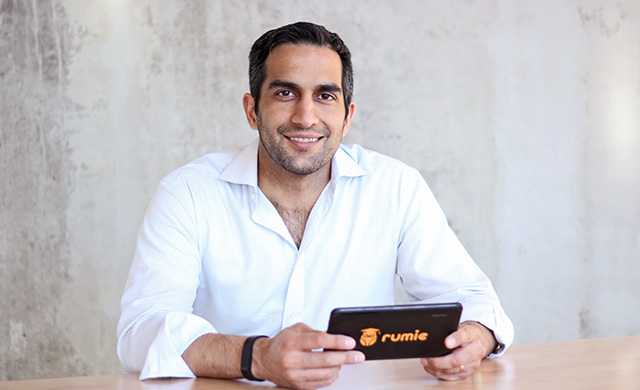 “Everyone has been made for some particular work, and the desire for that work has been put in every heart.” So said 13th-century theologian and poet Jalal al-Din Mohammad Rumi, for whom Tariq Fancy named his Toronto-based non-profit organization The Rumie Initiative (Fancy added the “e” as a nod to “education”).

The particular work for which Fancy was made – free and accessible education to underserved communities worldwide – was inspired by a friend who pursued his own life’s work just before his life ended.

“Education has always been dear to me and [creating Rumie] was driven by my friend and his example,” says Fancy of his Dutch classmate, Michiel Lowenberg. “We’d always said we’d do something good someday, but it’s easy to get caught up with other priorities in life. When he was diagnosed with stage 4 cancer, there was no more ‘someday’.”

So, in 2013, the same year Lowenberg died, Fancy traded in a lucrative career as the youngest partner at a Wall Street investment firm to launch his brainchild (for no salary and a good chunk of his own savings): providing low-cost tablets preloaded with customized educational content. But he quickly realized that if he took no salary, he would burn through his cash reserves to the point he could no longer fund the company. So, he recruited some high-level backers and Rumie was born.

How big a learning curve was launching Rumie?

I’d started my career in finance and business in Silicon Valley and, about 14 years ago, I’d been working and investing to bring basic mobile phones into Africa and emerging markets. In less developed places where it would have been expensive to build out landline systems, it had become affordable and practical enough to leap frog landlines and just go straight to mobile phones, which were cheaper, better, faster. I looked at Rumie the same way. It was another opportunity to leap frog, this time with education.

You can find a lot of great material online that’s free. We always work with a local partner who does the heavy lifting on the curriculum. Our view has always been to listen. As a result, we’ve [learned] that communities want things that are different than what people assumed. We’ve found most communities want more practical job skills, which will bring economic value to their families.

What software are you using to deliver the content?

It’s a portal called LearnCloud. There are other software components that work on a tablet or smartphone, but the core of it is the LearnCloud platform, where people can find free learning content, and where they can contribute and share learning resources. The software allows you to take the content offline on a smartphone or a specific Rumie device.

How did you develop it?

We won Google’s Impact Challenge last year and, besides funding us, they’ve helped with technology. LearnCloud is based on the Android operating system, which is open source and is widely used in the world.

Which apps and software do you use to run your business?

We use a lot of tools from a company called Atlassian, including Jira, Bitbucket and Confluence, for project management, code storage and best practices/guidelines respectively. We also use Google apps for email, calendar, doc management, etc., as well as Slack for communications.

Where do you see Rumie in five years?

I think the organization is poised for exponential growth, because we’re working with the target countries’ telecommunications providers to install the software on their growing smartphone bases.

The initial goal was to educate a billion kids. Where are you now?

Somewhere in the hundreds of thousands. We want to work with telecommunications providers that can pre-install our software on their subscribers’ devices. That’s the key to growth. We have an app-based version that anyone can use anywhere. We're now piloting this with Roshan Telecom in Afghanistan. The results so far are excellent.

What do you wish you knew then that you know now?

Probably the importance of execution. The social business space is a bit too heavy on the social part and not heavy enough on the innovation or business part. With a lot of social innovations and programs, people leave behind all their business principles – the pieces that make it all work. We want to be as efficient as possible; we want to be better than the best for–profit tech startup, because our mission matters more.

To read more about another social entrepreneur, click here to check out our story on Lucky Iron Fish.