How Mitch Cobb and friends are building community, one craft beer at a time 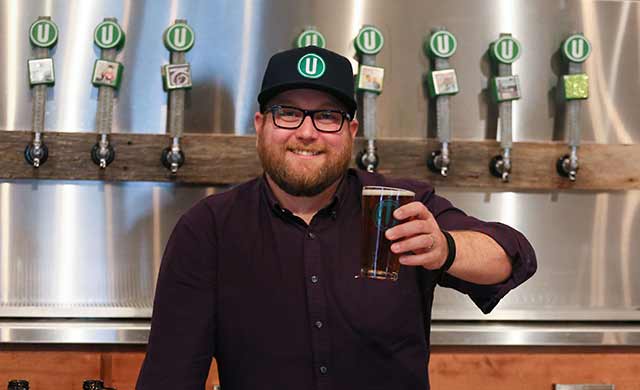 Starting a brewery was a pie-in-the-sky dream for Mitch Cobb and Mike Hogan – a cool idea they talked about between sips of Hogan’s home-brewed beers. “We’d get together on Sundays and I’d help Mike home-brew, and we started the conversation of how fun it would be to start a brewery,” says Cobb. “It got more and more serious, and we decided that if we didn’t do it, we’d regret it.”

They already had careers in their hometown of Charlottetown, P.E.I. – Cobb was a college instructor, and Hogan was a computer engineer – but in June 2015, after a year and a half spent developing their idea and securing financing, the friends launched Upstreet Craft Brewing with a staff of eight. The goal? Build a socially responsible company that would contribute to the community. Cobb is the CEO, and Hogan is the “Beer Engineer.”

Upstreet now has 35 employees, and Cobb plans to hire 20 more in the next few months. The brewery makes five flagship beers, and a rotating selection of seasonal and one-off varieties, for a total of 10 to 12 beers at any time. Upstreet distributes kegs and bottles across Atlantic Canada and sells beer in the brewery’s adjoining restaurant/retail store, The Taproom.

Less than three years after opening its doors, Upstreet is one of P.E.I.’s most-celebrated businesses. The company was a finalist in the EY Entrepreneur of the Year 2017 Atlantic awards, it won Startup Canada’s Social Enterprise Award in 2016, and it’s P.E.I.’s first certified B Corp, which means it adheres to rigorous requirements for accountability, transparency, and social and environmental performance. Next to Upstreet’s opening day, earning B Corp certification is Cobb’s proudest moment. “That was a huge accomplishment for us,” he says.

Upstreet still uses the B Corp assessment tool to set yearly goals, says Cobb. He admits it can be difficult to stick to the plan, especially when cheaper, more convenient options are available. “We’re always running up against challenges – do we source local product that doesn’t have to travel as far but maybe isn’t as environmentally friendly as something from Toronto, but which has to travel here?” he says.

“There’s always that give and take, and you just have to make the best decision you can.” - Mitch Cobb, Upstreet Craft Brewing

Upstreet’s other quandaries will be familiar to many entrepreneurs. “When we were eight staff, every day we talked to everyone. Now it’s harder to stay connected and make sure everyone feels their voices are heard,” he says. To remedy this, Cobb and his team have adopted various cloud-based apps for messaging and collaboration, and have implemented software that helps breweries manage inventory, from raw materials to finished product.

Digital technology also plays a key role in Upstreet’s marketing. In addition to its website, the company is active on Twitter, Instagram, LinkedIn, Google+, Facebook and YouTube. “We really leveraged social media when we were starting out. We developed a marketing strategy around interesting events, whether it was beer releases, a Christmas tree lighting or a big block party,” says Cobb. “At the core of these events, we’re creating content we can use in social media to pique people’s interest. We have a person dedicated to social media, who coordinates the events and the content between the different channels.”

What’s next for the busy brewery? Upstreet is opening a second location of The Taproom in downtown Charlottetown this spring, and it’s also launching a line of sodas. Throughout it all, says Cobb, Upstreet will continue to increase its community impact. We’ll drink to that.