The sky’s the limit for drones as InDro Robotics as CEO Philip Reece describes the revolutionary applications for the ever-evolving device. 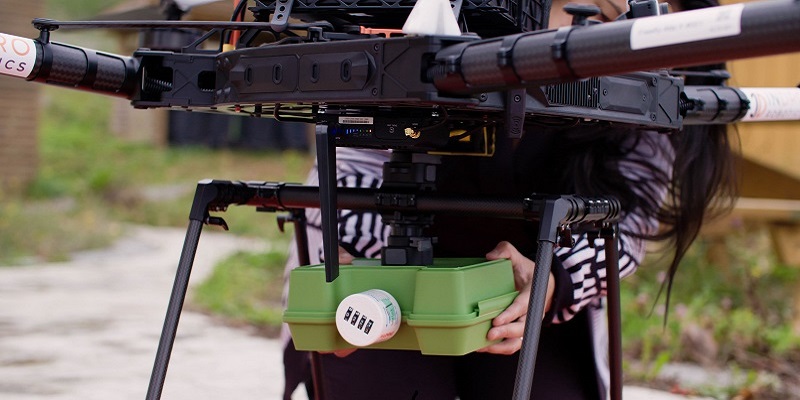 Forget small buzzing cameras with limited flight-time. For a few major players, drone advancement is the next big technological frontier. Leaders like InDro Robotics are paving the way in the unmanned aerial vehicle (UAV) industry with continuous innovation and a collection of breakthrough achievements. The small Salt Spring Island, BC start-up was the first to receive an air cargo license in Canada, achieve flight at night, soar over a city, utilize 5G and wireless private networks as well as receive the rare BVLOS certification, allowing for journeys beyond view from a pilot.  Since its founding, CEO Philip Reece and his team have pushed the limits for longer flight times, heavier carrying capacity and better wind resistance. The result is a reimagined perspective on the drone as tool to fuel change, not just assist.

Transporting medical supplies in an emergency can be a challenge in the best of times, but when the injured patient is at a remote or less-accessible location, it can quickly become a life-or-death situation. Such scenarios can occur on mine sites which are typically remote and hard to access. The operation’s roads are often busy with heavy machinery and trucks, making it difficult to dispatch emergency materials. “If someone is injured in a mine it could take first responders 30-40 minutes to access the location while a drone could be there in minutes,” explains Reece. “That really brought home what we were working for.” InDro Robotics drones, which can carry up to 33lbs, currently operate in these environments to deliver life-saving equipment like EpiPens or defibrillators. “For every minute someone is without medical aid, their chances of recovery decreases,” says Reece. “So any reduction in delivery time is a big deal.”

"If someone is injured in a mine it could take first responders 30-40 minutes to access the location while a drone could be there in minutes."

In early 2021, the team made headlines after becoming the first to fly on a 5G network, soaring over the UBC campus in Vancouver. A few months later they returned to launch another journey, this time over a wireless private network, another industry innovation. The flight proved that drones could seamlessly switch from public to private networks without any disruption or errors in the trip. Though it may seem like a small shift, the implications are huge for numerous industries including mining, utility and healthcare. Devices can now extend their reach beyond the space covered by one particular network without losing the connection between the drone and pilot. “We’re unleashing even greater potential for drones,” says Reece. “An engineer can carry out critical work from their office, which is exponentially safer.”

Though paramedic and firefighters were some of InDro Robotics’ most enthusiastic adopters, a few months after introducing the technology the team found it unused. “They liked the technology but once they were on the scene, they were laser focused on the job at hand,” explains Reece. “That’s understandable; it’s more important. But they still needed the information from the drone.” During testing, the emergency workers were able to view all angles of a scene on a tablet, helping them determine the scope of the incident and plan accordingly. Reece suggested his team remotely capture and process the data, relaying the critical information to those on scene. “I said, ‘Now when you arrive at the scene, open the box, press one button and forget about it.’”

Now when you arrive at the scene, open the box, press one button and forget about it.”

In the past, drones connected to standard radio frequency or satellite, but neither had the speed required for today’s applications. According to Reece, only newer networks like 5G and wireless private networks can provide near-zero latency and high enough bandwidth. That type of connection is necessary when his staff are piloting drones remotely across the country in all types of situations. “If you walk into our command centres, you’ll see a fire on one screen, a farm on another and each person is engaged in completely different tasks,” says Reece. “Do the people on the ground realize that a drone gave them the information? Do they care? The most important thing is we’re able to help.”

What’s next? How AI will influence drones of the future

With a long history of industry-first innovations, InDro Robotics is focused on the future, including increasing autonomy though AI. Already, both drones and robotics use the technology in small yet impactful ways. “Robots on the ground can estimate the angle of a slope and determine if it’s too steep and other machines can understand a command simply from a human gesture,” says Reece. “We also have a few more projects underway in the lab where the AI is really learning how to get to the correct solution on its own.” For Reece and team, the advancements are less about simply achieving another technology breakthrough and more about the human impact. “Right now, the greatest benefit is likely to come in heavier industrial scenarios–places like mines and large factories where people are at a higher risk. The smarter we can make the devices, the more actions we can rely on and our role will be more like air traffic control. The drone will carry out the hard work on its own.”